From delivery to pick-up,

The technology used by Concrete Washout Solutions stems back to deep rooted experiences within the construction and concrete industries. The visionaries behind these revolutionary concrete washout systems have spent most, if not all, of their adult lives within the construction industry — nearly 100 years of combined experience. While working in these industries, they saw concrete waste management go from no compliance measures on jobsites, where concrete was washed directly into drain inlets, to where we are today. 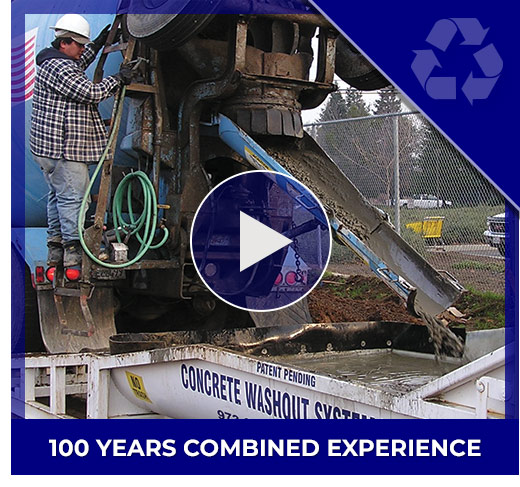 At the turn of the century, the construction market saw the first wave of concrete waste disposal control measures being implemented on job sites. The worst of the violations included constructing concrete washout pits — dirt pits to contain concrete washout material. Most, if not all of the contractors were dismayed as to why they needed to do anything. Concrete was harmless after all, or so we all thought, and they had been washing out their concrete trucks on lots and in uncontained areas for as long as they could remember. But they were told that new concrete waste management and containment was needed. Not long after that, we were being directed to perform our concrete washout in a designated area that was now lined with hay bales and plastic.

We saw a huge problem with not diverting and recycling the concrete material. In fact, what was actually occurring on each job site was increased concrete waste heading to the landfill. The sites were still messy and muddy from the concrete wash-water, and we began thinking there had to be a better solution to handling this concrete waste.

After numerous drawings and meetings, the first concrete washout container prototype was built and dropped off at a local job site. It was very well received by the contractors, prompting an application for patent protection.

Fast forward to today, and in a short period of time, we have taken the entire industry by storm, providing contractors across New Jersey and the Philadelphia metro area with a compliant and affordable solution to an industry-wide problem. We’d love to help your company too! Get in touch today to get your solution to washout pollution.